It is no doubt that football stars are among top earners in the world of sports and by extension other fields, reasons we have taken time to list top ten most valuables at five different positions on the pitch and their worth according to CIES
Russia 2018 World Cup winning teenager Kylian Mbappe is the most valuable footballer according CIES Football Observatory.
The Frenchman is valued at €216.5 million compared to his ratings in the out-gone month which was pegged at €193.5 million.
He scored four goals in seven matches for France as they emerge victorious for the second time at the global football showpiece.
The youngster outshines the current world most expensive footballer Neymar and Harry Kane on the list of the most expensive football stars.
View image on Twitter 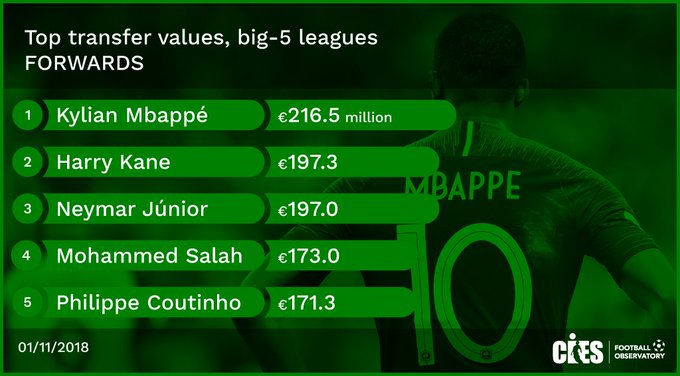 36 people are talking about this

Twitter Ads information and privacy
Tottenham Hotspur forward Kane is second on the list after being rated €197.3 million, while Neymar is pegged at €197.0m.
Meanwhile, Cristiano Ronaldo is missing in the top ten list of most expensive football stars for this month by the report released by CIES.
Manchester City goalkeeper Ederson Moraes tops the list of the most valuable shot stoppers at €102.0 million.
View image on Twitter 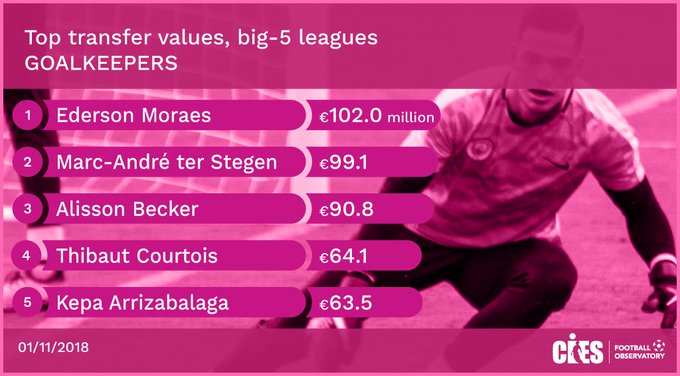 CIES Football Obs@CIES_Football
And finally, most expensive goalkeepers in the big-5 from a transfer value perspective #Ederson #terStegen #Alisson #Courtois #Kepa Top 10 per position in last @CIES_Football Weekly Post at

21 people are talking about this

Twitter Ads information and privacy
Barcelona’s Marc-André ter Stegen and Liverpool keeper Alisson Becker flanks him in the second and third positions respectively with €99.1m and 90.8m.
Liverpool right back Trent Alexander-Arnold is the most valued star in his position with €96.4 in the month review of football stars worth.
View image on Twitter 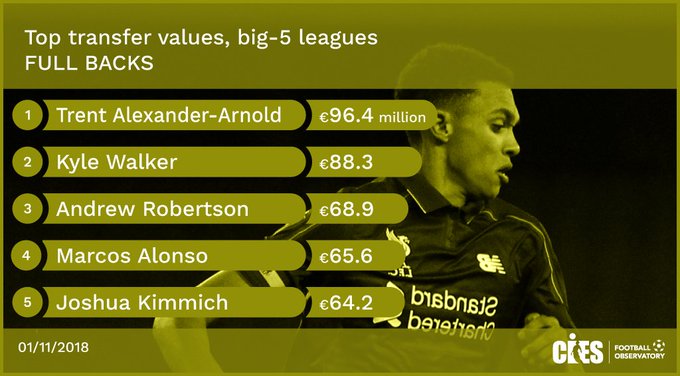 20 people are talking about this

Twitter Ads information and privacy
Kyle Walker of Manchester City is ranked second with at a value of €88.3m while Liverpool’s Andew Robertson is pegged at €68.9m.
In the center back position, Barcelona’s Samuel Umtiti tops the chart with €99.2 million, while Spurs Davinson Sanchez and Chelsea’s Antonio Rudiger are second and third rated at €97.2m and €81.6 million respectively.
View image on Twitter 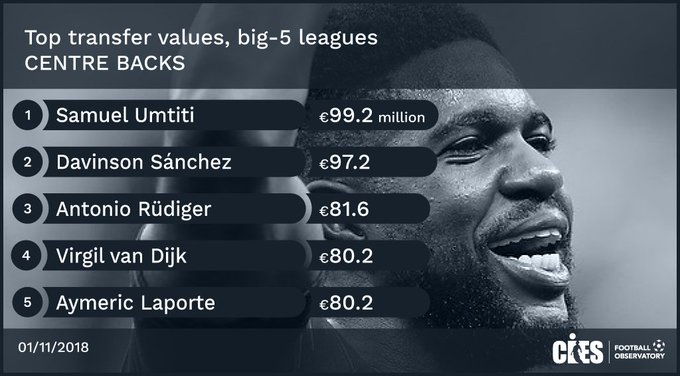 33 people are talking about this

Twitter Ads information and privacy
Tottenham and England midfielder Dele Alli beat Man City star Kevin De Bruyne by a margin of about €13 million to top the chart in his position.
The 22-year-old ranks top of the top ten list with €163.4 million, while the Belgian follows with a value of €150.4 million.
Manchester United’s most expensive star Paul Pogba completes the top three list with €130.5 million as his current worth.
← Previous Post
Next Post →